This is the first instalment of the L J Gregory Offshoots Symphony Project 2010/11 blog. The Offshoots Symphony is a sound art/acousmatic project running over the course of one year from March 2010 to March 2011. Over this period I will make sound recordings at and around the Offshoots Permaculture site in Burnley Lancashire which will be used to create acousmatic compositions which showcase the diversity of life and human interaction with that life in order to promote the site and permaculture and to further develop my abilities in field recording and acousmatic composition. Each instalment of this blog (there will be between 10 and 12, approximately one a month) will feature audio, video, photography, art and text relating to recordings and compositions made, completed and in progress during the period since the last instalment.

The music i create for this project will be very sympathetic to/celebrate the sound sources recorded as opposed to my experimental works which are about the sounds and not their causes and using/processing those sounds as rich textures for compositions not relating to their origin. In the same way that a painter uses paint to create images not relating to the source of their colour (yep my head is in the clouds but my feet are on the ground, one of the wonders of being tall!)

I made my first field 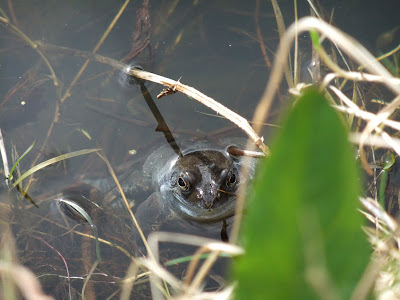 recordings for the project on the 17th & 18th of March when i stayed overnight at the site to record common frog’s, tawny owl’s and the dawn chorus. I recorded the frogs in the late afternoon when the site had cleared of (noisy) people. It was quite sunny (which the frog’s like) and still (which my microphone likes) and i got about 40 minutes of great recordings. The frogs are active for around 3 weeks at this time of year to mate but only come to the surface if the sun shines! I made further recordings of the frogs on the 28th of March and now have a developing library of audio patterns formed from their combined croaks from which i will begin to develop themes.

It stayed still into the evening and the owls began to stir at around 10pm only the male/s though, presumably attempting to attract the females who, unfortunately, were either very quiet or quite disinterested on this occasion. The male tawny owl call is a harsher screeching twit to the female’s softer twoo! Maybe the females came out later as i fell asleep by midnight. Next time i will sleep through the day prior to arriving. 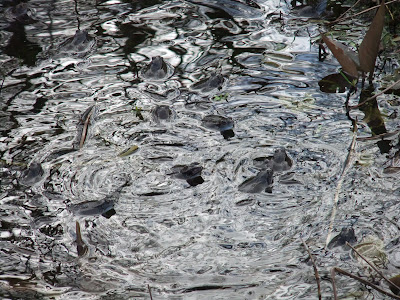 I was up bright and early at around 4.30am to set up for the morning birds. As the weather was still nice and Offshoots is sufficiently back from the road that the sound of cars is quite feint (at least it is this early) i managed to capture a good 90 minutes of wonderful dawn chorus including the calls of crow’s and songs of great tit’s, blue tit’s, robins, song thrushes, collared doves, wood pigeons, and black bird’s. On occasions later in the year i hope to capture (the sounds of) woodpeckers and migrating birds including swallows, chif chaf’s, willow warblers, spotted fly catchers and house martins who are all known to frequent the site. Whether these will become one large evolving piece of form several small pieces interspersed throughout the symphony i have yet to decide.

On the 23rd of March i made recordings of an Ashford double treadle spinning wheel operated by my wonderful (see very understanding) wife Joe (a qualified permaculture practitioner) at our home in Todmorden. I intend to combine these with recordings i made late last year of my friend Jackie Katanga operating her single treadle Ashford spinning wheel. Spinning is a traditional and sustainable skill taught in workshops at Offshoots which fits in with permaculture very well and provides interesting rhythmic possibilities in terms of composition. Other traditional skill to feature in the symphony will include bodging (the ancient art of the wood butcher) and bee keeping.

In future instalments of this blog i will include information and media relating to further recordings and the process of using those recording to create music. In the summer i will be doing a children’s workshop with the Wildthings kid’s club, run by Joe, at the site, recordings of and from which will become another piece as children are as much a part of permaculture as compost, charcoal or stacking, as they are the future.

You can download and listen to an earlier piece i created from recordings made at the site in February 2008 here:
http://www.archive.org/search.php?query=creator%3A%22Lee%20Gregory%20(Randomlee)%22

To listen to my experimental works and pieces for this project as they appear go here:
www.myspace.com/randomleeaudio

Many sincerest thanks to: Joe, Phil, Lisa, Alan, Jackie, Eddie, Glen, Vince, Chris and the birds, frogs, bee’s and bats for their help, support and enthusiasm for this project, i promise i will do my upmost to produce something very special for you all.

All text, audio, video and images except the Offshoots logo by ©Lee James Gregory 2010