This is the fourth Offshoots Symphony blog. I have been away for part of the month so will focus on the Wildthings sound art family day which happened on Thursday August 12th. My wife Joe, who runs Wildthings at Offshoots, helped me out, which was good as 20+ kids turned up on the day.

We all started with the veil of silence, where we all put our hands in the air and then as we floated our arms down silence fell upon us all and only the sounds around us could be heard.

Then we gave the kids paper, clip boards, pencils and coloured pencils and asked them to draw pictures of the sounds they could hear, either the objects making the sounds or how they think the sounds themselves might look. They created some wonderful images some of which are displayed here in a slide show: 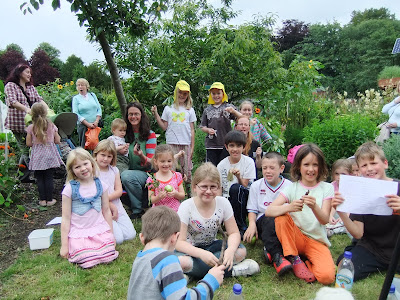 ake sounds with from the site and the

woods behind Offshoots while i set up recording equipment. I had intended to join them after setting up but they had all vanished into the woods and i could not find them! Fortunately they all returned safely a short while later with lots of interesting woodland instruments ranging from sticks and branches to nuts, leaves and stones in tubs.

Earlier in the day Joe and myself had written a little song for which the kids would use these instruments and vocalisations (in the end mostly vocalisations) to create the music. First we had a number of rehearsals; Joe led the song with the kids making sounds with their voices and instrument where appropriate. I then recorded three takes to go away and work with. It went really nicely. There is a rough demo of the song for you to listen to here:

On their return from the woods i first made recordings of the kids making sounds with their individual instruments. All these recordings had lots of sounds of children in the background, but whereas i would normally try to have everything else silent other than the sound being recorded, in this instance these extra sounds were great as the kids themselves were as much the instrument as the sounds they made with their objects. I will use these recordings to embellish the song we recorded for the album version.

Thank you to all the children and parents/grandparents/carers that turned up on the day, we had people come from an area spanning Nelson to Hebden Bridge, you were all wonderful.

In September i hope to make recording of bats which will feature in the next blog.

Many sincerest thanks to: Joe, Phil, Lisa, Alan, Jackie, both Eddie’s, Chris and the birds, frogs, bee’s and bats for their continued help, support and enthusiasm for this project.