It’s been a while since the last blog. I moved house and had a lot of other commitments (including releasing my experimental CD and a concert last October) but have been working on the project intermittently throughout.

.
This has mainly consisted of cleaning up the recordings I made last spring and summer to prepare them for use as source sounds which will become the instruments used for the project. This means taking each recording and removing any unwanted sounds, such as cars, dogs and other incidental sounds as well as hiss/noise from the recording equipment. This can be very demanding and time consuming when working with long files such as those i made of dawn choruses. To do this I first use Steinberg Wavelab (a professional audio editing and mastering environment) to raise the gain (volume) of recordings and remove as much noise as possible using EQ. Most bird sounds fall between 100Hz and 15 KHz so removal of sound below and above these frequencies takes out low level hum and most car sound at the low end and while also removing any anomalous high frequency sounds. I made all of these recording using an Audio Technica AT825 field recording microphone, which is normally used for more near field (closer to the subject) recordings, a pre-amp to boost the gain of the incoming signal and a Fostex FR2-LE field recorder, which makes very good quality, though quite quiet recordings. This resulted in the recordings being quieter than I would have liked with the birds, which were often quite far away from the microphone. When I raised the gain of the recordings I also raised the gain of hiss/noise from the recording equipment. I removed as much of this as possible without distorting the sounds of the birds using Wavelab’s DeHisser. When working with lower frequency sounds such as frogs the process is similar; the recordings are made nearer to the subject so hiss is easier to remove though they are lower frequency so noise like car sounds are more difficult.
. 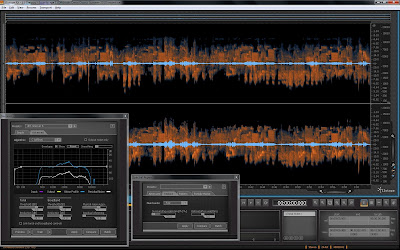 ...
When I’ve done as much as I can in Wavelab I use Izotope RX (a professional audio restoration software) to clean up remaining noise. This is where things get laborious as each second and often millisecond needs to be carefully examined and cleaned, which when working with files upwards of an hour takes a long time. Using this software I can see not only the volume but the frequency spectrum of all the sounds as a linear graphical representation. I can then use my ears and my eyes to identify issues. The software offers a number of useful tools to correct these issues like being able to isolate and delete very small areas in the frequency spectrum without affecting any other sounds. If unwanted sound occupies the same frequencies as sound you want to keep you can map the unwanted sound by using the Denoiser to analyse areas where the sound is isolated then highlighting the areas where sounds are mixed and just remove what you don’t want, with varying degrees of success. If it is not possible to satisfactorily clean up sounds you can delete small segments of the recording and use spectral repair (at a millisecond level) to reconnect the sounds at either side so you can’t tell they were ever there. This is excellent software which I recommend to anybody considering doing this kind of thing.

.
I have uploaded a 79 minute, 24bit soundscape recording, which I used these processes to prepare, of a dawn chorus made at Offshoots last June called ‘Soundscape 1’ here:

This is a 2 minute mp3 clip from 'Soundscape 1' 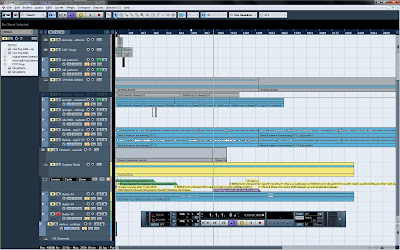 I am now nearing the point where I will begin composition, having cleaned up and prepared all but the bee recordings. I have also begun categorizing them in Cubase and have sympathetically processes some of the frog sounds using CDP (Composers Desktop Project). I have many ideas noted in txt docs regarding composition and arrangement of what i have now decided will be one long piece between 45 and 80 minutes long, depending on ideas, flow and stringent quality control! I hope to have it finished by the end of April/beginning of May.

The next (hopefully timelier) blog will be about and feature samples of the work in progress.

Thanks again to everybody who has helped with and taken an interest in this project.

You can download and listen to an earlier piece I created from recordings made at the site in February 2008 here: