This is the second Offshoots Symphony project blog. Since the last instalment i have made recordings of Chris Barber, the rustic wood worker, and his Viking tall lathe and worked on music made of spinning wheels. I have also made a nice poster and earlier this week put together a press release with the help of Lisa Griffin, Offshoots project officer, who has just been really helpful generally, thanks Lisa. 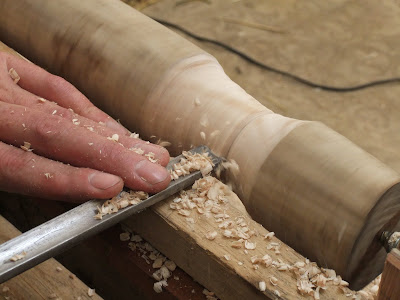 I recorded Chris in the Yurt at Offshoots on the morning of the 7th of May. We recorded in the yurt to minimise external noise (windmills and such!), which was just as well as just as we had finished setting up they started mowing the lawn on the bowling green next door! This was quite audible even inside the yurt so we had to turn everything around to face the opposite direction recording, using a direction mic to cut out the noise (small amounts of extreanious noise are removable in the studio). I made recordings of Chris using his Viking Tall Lathe and chopping and splitting wood. The tall lathe provided some good rhythmic sounds and varied as more of the wood was cut away, becoming smoother and more fluid and we got some good crisp sounds from the wood splitting.

I have also been working on music using the recordings of spinning wheels discussed in the last blog. The double treadle has a harsher sound with more percussive elements than the single treadle which is more ambient and has a longer, more drawn out rhythm. This will be down to the natural rhythm and spinning speed of the operators as much as the wheels themselves. After cleaning up the recordings (removing unwanted noise) i loaded all the recordings onto separate stereo tracks in Cubase (a software sequence/recording environment) then reviewed them individually choosing parts to work with, based on how the sounds felt and worked rhythmically, then removing the left-over sounds and manually (and minimally) quantizing (tightening up the rhythmic elements by moving them forward or backward in time slightly) the parts i had chosen to make them work better musically over time. These parts then become loops and breaks that will form the initial frame of the piece.

The piece will work by developing a number of spinning rhythms that will begin in the centre of a surround sound environment then lift off and pan around the space intersecting with each other to create rhythms within rhythms. i don’t want the piece to be too harsh rhythmically so i will use eq, and volume curves to soften the harsher elements . There will also be recordings of carders used incidentally during the piece.

Currently i plan to use this spinning track (provisionally called ‘Spinner’) and another rhythmic piece creates using the rustic wood working recordings i made with Chris at either end of a more expansive bird piece which will form part of each of them intertwining with their rhythms as it begins and ends.
In the coming weeks i will be making more recordings of birds as the soundscape has now changed since i last recorded (most notably by the blackbirds and swallows) and will finish the spinning piece.

On the 12th of August there will be a Wildthings sounds art workshop, as part of the Wildthings summer family days. Wildthings is a monthly kids club at offshoots run by my wife Joe and for this we will be working together, making recordings with the kids as well as other activities yet to be finalised; more info in the next blog.

Again thanks to: Joe, Phil, Lisa, Chris, Alan, Jackie, Eddie, and all at Offshoots, the birds, frogs, bee’s and bats for their ongoing help, support and enthusiasm for this project.